Nigel 'Fennel' Hudson is an angling and countryside author, broadcaster, publisher and editor. He's best known for his Fennel’s Journal series of books and as host of The Contented Countryman podcast. (You can see his bibliography here.) He’s a naturalist and outdoorsman who, through his travels in wild places, encourages us to 'Stop – Unplug – Escape – Enjoy.'

A traditional angler-naturalist, Fennel's work has been compared to that of BB, John Gierach, Chris Yates, Jack Hargreaves, Jon Beer, Roger Deakin and John Lewis-Stempel. He describes himself as a 'quietly connected' author whose writing has grown in popularity through word of mouth recommendation.

Fennel is secretary of The Angling Writers' Association, editor of Grayling magazine (the flagship publication of The Grayling Society) and writes regular features for The Flyfishers' Journal. His articles have also featured in Angling Times, Trout & Salmon and Classic Angling.

Fennel observes the subtle things – around and within us – that might otherwise go unnoticed. He seeks the rural idyll, values old-fashioned things and champions a relaxing, peaceful, rural life. Much of his writing, which is quintessentially pastoral, centres on what he calls 'The Quiet Fields' – the hidden corners of the landscape where time moves slowly and nature exists undisturbed.

Click here for a summary of Fennel's journey to date. 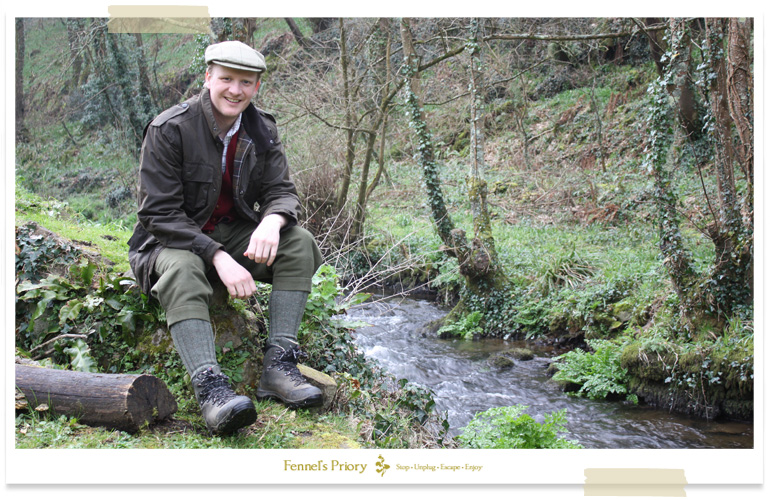 Born in England in 1974, Fennel grew up exploring the fields, woods and streams of Shropshire and the Welsh marches. Working as a gardener and estate hand, he savoured a slow-paced idyllic life. This gave him a unique understanding of the meaning and True Beauty of life, which he shares by reminding us to ‘Stop – Unplug – Escape – Enjoy’.

Born to love the countryside

Growing up on a smallholding on the edge of the 6,500-acre Enville Estate in Shropshire, Fennel spent his early years helping his parents with their classically 'Good Life' inspired self-sufficient lifestyle: growing and harvesting fruit and vegetables and tending to the family's chickens. His maternal family had farmed the Shropshire countryside for over 300 years, so Fennel inherited a sense of heritage and deep-rooted love of the outdoors. Gardening, shooting and fishing were important to his way of life and soon Fennel was adept at preparing food for the table. His love of the countryside developed into enthusiasm for natural history, where studying wildlife – and our relationship with it – became his lifelong passion.

Fennel the nature and lifestyle writer

Fennel's first short story was published at the age of 13. It was a tale about wizards, dragons and dwarves, and was adopted by his school for its Dungeons & Dragons club. He then became Editor of the school newspaper and copywriter for his colleges' brochures. This inspired him to write a book a year about his passions for the outdoors. (See his bibliography here.)

At the age of 23 Fennel was asked by Chris Yates to write a regular feature in Waterlog, the traditional anglers' magazine. He declined due to modesty but privately accepted the challenge, writing more than a hundred articles in secret that have since formed the basis of the Fennel's Journal series of books.

His favourite reader review is:

"Fennel has captured the essence of the countryside – that is, its almost human character. So brilliantly has he compared and contrasted it with the nature of we humans. His writing is not so much a 'balanced study', more a 'study of the balance' that exists between Nature and Man."

Fennel the wildlife artist and illustrator

Fennel studied art at college, developing an appreciation of traditional techniques in oils, pencil, graphite stick, lino cut and etchings. However, it wasn't until he met professional artist and author Bernard Venables in 1995 that his skills were honed and he became aware of the possibilities of a talent that had previously been a hobby.

Bernard taught Fennel the brush and ink technique that he used to illustrate in his books, and encouraged him to broaden his use of mediums and develop greater personal identity as an artist. Fennel was quick to use his skills to build a reputation as a landscape illustrator and designer of corporate logos.

As the firstborn grandson into an angling family, it was inevitable that Fennel would become a fisherman. He inherited his grandfather's collection of vintage fishing tackle and classic angling books, and so developed traditional values and appreciation of antique tackle such as split cane bamboo rods.

He caught his first fish – a brown trout from a Welsh reserviour – at the age of six, which put in place his love of fly-fishing. Principally a game fisherman, Fennel is also known for his passion for wild carp that he fishes for in overgrown and 'forgotten' ponds. He's travelled the length of the UK – and even to their home river The Danube – in search of the oldest strains of wild and feral carp. (See his book Wild Carp.)

Fennel began corresponding with traditional angler and respected author Chris Yates during the early 1990s. Their correspondence evolved into friendship and so, in 1995, Fennel was invited to join Chris' Golden Scale Club – a select and somewhat eccentric group of traditionalists that included famous anglers such as Bernard Venables, Richard Walker, Maurice Ingham, Peter Stone, Mike Winter and Peter Wheat. It's here that he was given his Club nickname 'Fennel', which has been his nom de plume ever since.

"Nigel, who is 21, is one of the generations of younger anglers who gives me faith in the future."

Today, Fennel can mostly be found exploring wild waters for wild fish, especially near to his North Wales home where he fishes for trout, grayling and wild carp plus the occasional salmon and sea trout. He still fishes simply and traditionally for all freshwater fish, using traditionally-styled tackle and always seeking 'unknown' waters that require watercraft to unlock their secrets. He also sits on the General Committee that governs Prince Charles' The Flyfishers' Club of London and is a member of the esteemed British Carp Study Group (BCSG).

Fennel passionately believes in individuality, personal identity and life purpose: that we should always know and remain true to ourselves. Because of this, he always champions adventure, freedom, and a meaningful life. His favourite quote is: "Don't do anything that offends your soul".

Fennel has recorded a series of films about The Fennel's Journal Story, and Evolution of Fennel's Journal from handwritten letters to books. They're a great way to immerse yourself in his world prior to reading his books.