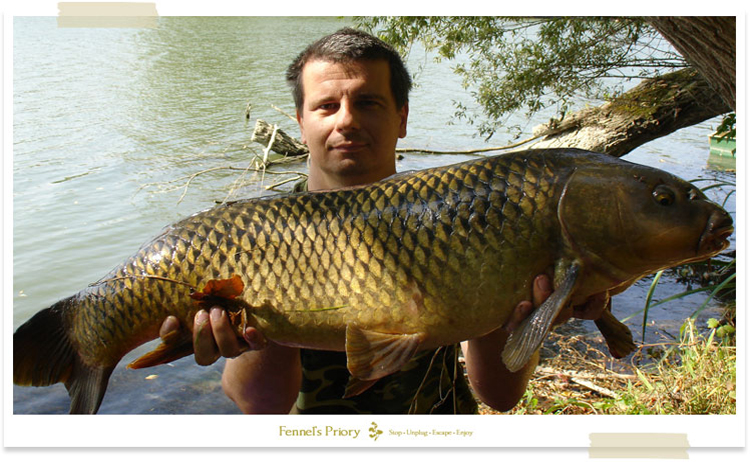 The Wild Carp of the Danube

Priory Slovakian correspondent Pavol ‘Pali’ Timko fishes the river Danube – the natural home of the true wild carp. Here we talk to him about his discovery of the Holy Grail.

Fennel: In the UK, the wild carp is the Holy Grail of the traditional carp angler. How is the fish perceived in Slovakia?

Pali: Wild carp are called “sazan” in our country. Sazan is the original wild subspecies that survived thousands of years in the Danube and its tributaries. Though domesticated carp have been bred for two millennia, sazan seem to spawn in different areas and that explains why they still exist. This species is considered critically endangered due to vanishing spawning habitats and though carp in general is eaten in our country, sazan is protected by law. It wouldn’t be possible for an angler to specialize in sazan because in our legal system it would be unacceptable to target a protected fish; nevertheless sazan are sometimes caught accidentally, which is my case.

Fennel: The water that you fish – the river Danube – is Europe’s second-longest river and very different to the traditional ponds of Britain. Could you describe the river where you fish, telling us about the features, wildlife and characteristics.

Pali: When the Danube leaves the Alps it reaches the Pannonia basin, also called the inland delta. The distributary system is like a maze with jungle-like forests. To the South-West is Hungary, North-East is Slovakia. Along the border there is the old Danube but the majority of water flows through the artificial new channel (banned for anglers) that feeds the biggest hydro plant in Slovakia. The biggest challenge with this type of water is to locate fish because the water surface is huge. Carp are nomadic and the water is full of fallen trees, which makes good for escaping fish. From time to time we face floods but the dam decreased this danger. Nature is incredible here, with birds, animals – beaver returned recently. Just beware: mosquitos make hell in summer.

Fennel: The Danube must pose a daunting challenge to the angler. How do you fish such a river?

Pali: My main interest has focused on distributaries. The key to success is finding the right spot (as always in carp fishing). Wild carp like hideouts; the vicinity of streams and oxygenated water but close to groups of fallen trees is the key. You may see many trees around and yet find no carp in the vicinity. It seems to me that combination of rocky riverbed and trees is important. Also the food sources must be around. Clusters of mussels may make your fishing hard but they are natural food for carp. Swims like this can be approached only from a boat. Too far from the trees and you will have no takes. Too close and fish may be endangered if you don’t know what you are doing. The secret is to find a very dense snag. I’ve found that carp may escape towards such a snag but will not enter into it, especially if the fish is not bothered by strong pull of an angler.

Fennel: Is it possible to specifically target wild carp?

Pali: No. It is illegal to target sazan in my country. And don’t forget, scientific research says you have less than 0.1% chance to land a wild sazan carp. I read a scientific article from the 1980s that told of an ichthyology survey where 6,276 carp caught from the Danube contained only 18 sazans and only 3 of them were original wild carp without slightest doubt. To catch such a fish is like winning the lottery. Consider this: I caught one sazan in 1998, two in 2006 and one in 2009.

Fennel: The question that’s really burning is ‘what is it actually like to hook and play a true wild carp?’

Pali: They are tireless fighters. That is the key characteristic. Take the fish on the left for example. This was 87cm long and weighed 9 kilos (around 20 lbs). Its capture is a memory which will never be forgotten. From my peg I placed my bait onto a rocky slope behind a sunken dam. The top of the sunken dam is 1.6m deep and the slope goes down to an 8m hole, fallen trees are very close. When I placed the bait I saw this carp jump like a dolphin out of the water and I was speechless for a while. I thought, “Oh my God, such a fish, I would love to have it on my line!” And yes, the take came later. I looked at the tip of my rod and it was shivering. So I hit the rod. I felt the fish on other end and jumped into the boat. The fish swam into long weeds so I had to rip off plants by hand, then I could pull the carp out and yes, it was still there and with a little luck I was successful. When I pulled it out to the free water, the carp went mental and my boat turned three times by 360 degrees as the carp pulled me along like Moby Dick. The fight took for sure longer than thirty minutes and it required fine work handling the electric motor with one hand and the rod with the other. The carp continued to fight on my unhooking mat, which was placed so close to the water that the fish managed to jump back into the river. I was lucky because there were dense weeds and I jumped into water to retrieve the escaping carp. My wife, who took the photo, laughed so much that she was almost unable hold the camera.

Fennel: You mentioned the knocking on your rod tip when the fish took the bait. Is this typical?

Pali: In all instances sazan took the bait and didn’t run; they simply stayed there. I believe that mussels are the natural food to sazan. My concept is that they pick up mussels that are many times connected by sort of threads and by shaking their head they try to break off this fibre. Mussels are extremely sharp so I believe carp misevaluate a hook as a mussel stuck in their mouth. This shivering was visible on the rod tip. I struck and a carp was there. So this is a specific sign different to the other Danube carp I’ve caught.

Fennel: A true wild carp in the net must be one of life’s most exciting and truly special moments. Can you describe how you felt when you first caught one?

Pali: In 1998 I didn’t know much about wild carp beside fact they are protected and must be released after capture. Also at that time I was not much involved in carp fishing. But in 2006 I knew I’d achieved something extraordinary and I was in a state of positive shock. The feeling was supported after a meeting with ichthyology professor K. Hensel who was amazed when I showed him my photos and he stated that he believed that sazan is more or less extinct. He studied photos and said that they are sazan carp without any doubt. He showed me bones of a sazan carp found in an archaeological survey from some settlement near the Danube, dated if I remember right 2500 B.C.

Fennel: Could you describe how the true Danube wild carp looks and how it differs from the king carp in the river?

Pali: There is a lack of pronounced hump behind the head. Body is lean (at least 1:4 ratio) and its profile is more round and very muscular. Fins are stronger in general and rather greyish. Mouth is turned a bit more down than domesticated carp.

Fennel: Do you know of any historic stories about wild carp in your stretch of the Danube or in neighbouring regions?

Pali: Honestly, not really. Sazan carp is almost like Yeti or Big Foot. Some speak about it but almost nobody could see it with their own eyes. The Danube is really a treasure and wild carp seems to be the jewel in the crown.

Fennel: I heard that there’s a ‘secret’ pond in Slovakia where the true wild carp is preserved. Could you describe it to us?

Pali: It’s not a secret pond; it is a small reservoir in the village of Velčice. Fishing is prohibited. There is a non-profit organization that brought this lake into existence in cooperation with a state run ichthyology institution. It was stocked with genetically checked 100% sazan carp.

Fennel: It’s reassuring to know that the Sazan’s future is safe in a protected environment. Pali, thank you.

This blog is a sample chapter from the book Wild Carp by Fennel Hudson.