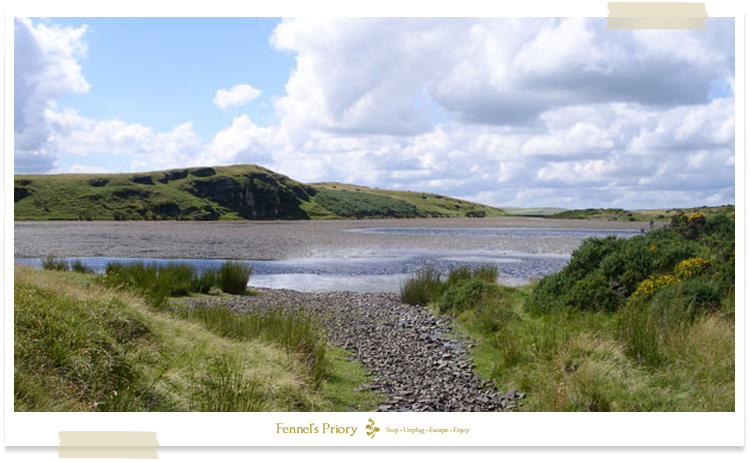 The mountain ranges around Builth Wells include the Black Mountains, Brecon Beacons, and Cambrian Mountains. Together they form a triangle around an area of exposed moorland that is dissected by wooded valleys and tumbling slate-bedded streams. I could see all of this as I climbed the mountain in search of the ultimate wild carp lake.

As I stared at the horizon, I became aware that the oppressively bleak landscape around me was framed by its own context of mountain, sky and earth. I realised that it wasn’t so much barren as isolated. We get so used to the gregarious nature of our towns and villages that we forget how crowded our existence has become. Here, on this mountain, with nothing but a wild landscape before me, I realised just how much we have influenced our surroundings and tamed the raw beauty of Nature. The sight before me hadn’t changed in thousands of years. If I were to find an ancient strain of carp it would be here.

It took me over an hour to reach the summit. Once there I could see a lake set between a rocky outcrop and a gorse-covered peak. Virtually round in shape, and about eight acres in size, it was sheltered from the elements in an amphitheatre of green. The sheep, which were dotted all about but had been absent from the rest of the mountain, knew that this was a life-giving place. A buzzard glided effortlessly above the pool and a heron stood motionless on the gravel shingle of the lake’s edge. The water was weedy, very weedy. It was covered in green leaves for all but a small area in the middle, which I guessed must either be deeper water or the source of a cold spring.

This was it. I knew it straight away. It was the lake that the local anglers had described, but more importantly I knew, from pure angling instinct, that there were carp here. It just felt right. Normally, lakes in this area would only contain brown trout, minnows or perch. But this lake was super-rich and shallow. There must have been a limestone seam nearby that was providing the nutrients for so much weed to grow.

I paused and evaluated the facts: here was a lake near the site of an old Roman encampment, set high up in the mountains overlooking a thirty-mile radius of barren moorland. It was sheltered and secluded, rich and warm watered. All the elements were coming together. I just had to get down there and prove, finally, that the ancient carp had survived.

Moving carefully towards the pool, I reached its shores without disturbing any fish or wildlife. A slow, observant, walk round the lake’s edges revealed that it was about four feet deep and that the weed – which was made up of a mixture of bistort and arrowhead – was incredibly dense. There were exposed shingle beaches all round, presumably because the water level was much lower than in winter. The water itself was gin clear. The margins were alive with fry and the bankside flora was in mid-flower. The gorse and heather were at their summer peak and the grasses, rushes and sedges were in bloom. It felt more like May than late August.

I opted to fish on the southern shore next to a rocky outcrop. This area was in full sun and had a greater amount of fry than elsewhere on the lake. If the water was warmest here, and the small fish liked it, then the carp would likely be nearby. I scattered small pieces of breadcrust into the margins and onto the weed and sat back to await signs of feeding fish. I hadn’t seen any carp-like movements or activity as I’d walked round, so even though my gut instinct was telling me that this was going to be ‘the water’, the inevitable self-doubt began to creep in. Twenty years of searching, hundreds of waters and endless strains of feral carp. It had been a long quest. Yet here was I within casting distance of my dream.

Out of the corner of my eye I saw a slight lifting of the weed, and then heard a faint and gentle sucking, similar to the sound of a kiss. I lifted the peak of my cap and stared at the water again. The weed was twitching and shifting as a fish worked its way from one piece of floating crust to the next. Another fish joined, then another. Very soon there were about a dozen fish feeding all along the water’s edge. I needed to get closer to the fish, to get proof that they were carp and not gummy-lipped trout with a taste for bread.

I moved stealthily down the bank towards the closest disturbance and there, just twelve feet from me, was the confirmation I sought – a set of white lips, about the size of a fifty pence piece, rising up out of the weed. Then came a glimpse of a head and the characteristic flash of golden scales. These were definitely carp. But were they wildies?

I watched the fish for fifteen minutes, transfixed by how wild creatures, following their instincts to feed on pieces of floating bread, fed exactly the same as their more domesticated relatives. There was every chance that these fish had never seen bait before, yet they were readily taking the free offerings.

With my heart in my mouth, my head dizzy from the adrenaline and my lungs breathing irregularly, I made my move to catch a fish. A small piece of crust attached to a size eight hook was freelined into one of the twitching weedbeds. Then, as the exact position of the fish became known, I drew the crust into its path.

The take came quickly. I never saw the fish, merely a sucking from beneath the crust and the slithering of line across the surface. I struck and the line drew taught as the fish ploughed through the weed. With weed bulging and swaying I hauled the fish back towards me and into my net. It was a short but hugely exhilarating fight.

After hoisting the fish ashore and parting the net’s mesh, I saw what I needed to behold: a wildie of about three pounds; dark bronze across its back, with golden brassy scales along each flank. But then the moment of truth: was there a notch at the back of its head? There was, but barely enough to notice. What was obvious though was its slender head and deeply forked tail, which appeared more like that of a roach than a carp. It was long, lean and solid; a very old strain of carp and my first wildie from this magical lake.

If Llyn Gwyn was the well-marketed bastion of wild carp in the UK, then the place I’d discovered must be The Sanctuary. For not only had the wildies survived, they had also escaped the attentions of anglers as well. This was a wild place with no signs of angling activity.

I caught several more wildies that afternoon, none larger than the first, but I did disturb a fish in the margins that could easily have been six pounds. But size or quantity of fish wasn’t the point. This was about completing the journey I’d started as a schoolboy, the culmination of so many years of reading, travelling and dreaming of wild carp. It was easily the best day’s fishing of my life. And yet, after just a few hours, I decided to leave. I could have carried on, catching and learning more of the lake’s secrets, but that could wait for another day.

The Sanctuary was a haven for the fish. And, as I soon discovered, for me as well.