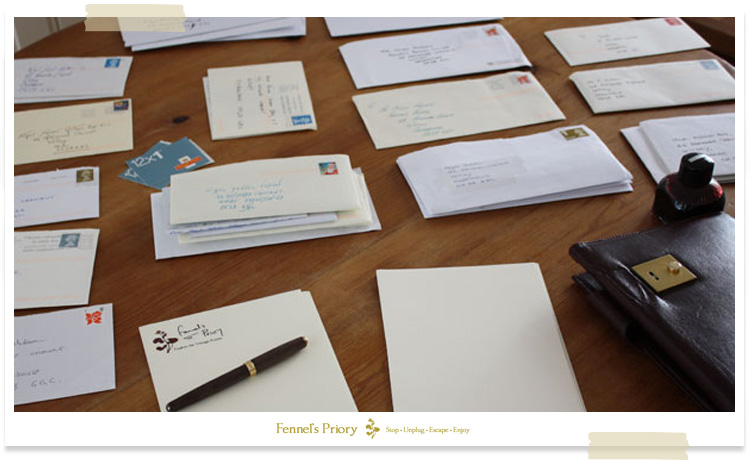 Excuse me if I start this chapter more slowly than usual, but I have to wait for the post to arrive. You see, the highlight of my day has gone super-nova with the arrival of someone new delivering the mail.

Ted, our old postman, retired this week. He’d worked in the village for forty-five years but left without a goodbye. We villagers were surprised at the suddenness of his departure, as he was always known for courtesy and never for speed. He chose not to ride his postman’s bicycle (it had a semi-flat tyre), but would instead push it along and spend much time leaning on gateposts while talking to people he met. Because of this, the post would rarely arrive before lunchtime, often around teatime. But this didn’t matter. By the time Ted knocked on the door, he’d have so much news to tell that the post became incidental to his urge to share the daily gossip.

Mrs Baines’ bunions were featured regularly in Ted’s updates, as did Flash Harry’s latest girlfriends and Dom the Disbeliever’s attempts to build an air-raid shelter in his front garden. Last week, ‘Uncle’ Edna’s “incredibly large spuds” had grown even bigger; Little Jimmy had bought some “unnaturally white” trainers and the nudists at Number 61 had upset Mrs Spiggot by opening their curtains on a Sunday. All healthy gossip, shared with the straight-faced honesty of a man who regularly attended church, had never married, and thought that infidelity was a brand of videocassette.

Now we have someone new delivering the mail. A woman. Young. Athletic. Firm.

Beatrix von Baum, as I call her, is a recent graduate of the Right Wing School of Postal Efficiency. Gone are mid-afternoon deliveries and jovial comments like “Mmm. Scented!” They’ve been replaced by letters bound with tight elastic bands, thrust through letterboxes with the flap-straining vigour of someone with a very strong grip.

Bea’s arrival has sent us male villagers into frenzy. Bob Dewar now mows his front lawn in winter, Ern Fletcher’s hedge is two feet lower, and Greasy Dave has started cleaning his windows. Shame on them. Yet here am I, standing adjacent to my living room window, peering through a crack in the curtain with the expectancy of the young lad who lives opposite Number 61.

I don’t know how she does it, but every day for the past three days Bea’ has arrived at exactly 11.26am. It is now 11.24am. Bob is mowing his lawn, Ern is clipping his hedge, and Dave is standing at his window, buffing. Ah. Here she comes, striding down the centre of the lane. Her blonde hair bounces provocatively with her every step; her long slender legs are topped with tight postal service shorts; and her – how shall we say? – ‘chest’ is cocooned in a puffed-up gilet. (Mmmm. ‘Bodywarmer…’) She’s carrying a postal bag over her shoulder and, in the cool morning air, appears as a picture of delight. But alas, she wears no smile. Bea’ has the steely resolve of someone approaching a high noon showdown. In fact, she has the look of a beauty queen who’s just lost her crown to the only woman to be given a refund from Weight Watchers.

Okay. Update. She has passed Bob. No letters. His mower cable has sagged and is lying lifeless on the lawn. Ern has got one letter. It’s a crisp white envelope that I can see says ‘Congratulations’. Never has Ern been so pleased to receive junk mail. Greasy Dave got his usual stack of brown envelopes and has disappeared from the window. Bea is now approaching my cottage. I repeat. My cottage. She’s reaching into her bag. She’s pulled out a bundle of letters. For me. There! She’s approaching. Coming. Now!

Oh, I’m just not up to this. I’ve closed the gap in the curtain and have pinned myself to the wall as I try to steady my breathing. I’ve heard the latch on the garden gate flick open, the crunching of footsteps on gravel and now, nothing. No flap of letterbox. No thud of envelopes hitting the carpet. No groan of employment satisfaction. Maybe she saw me? Maybe she’s peering through my living room window at this moment? Maybe she had a reckless urge and is dancing naked in my front garden? Control yourself Fennel. There must be an explanation.

Wait a moment while I go to the door. I don’t expect it to take long.

Right. I’m back. That was quick, and very strange. Pleasantly strange. But strange all the same. My first contact with the post ‘mistress’. Let me tell you how it went:

Bea’ passed me the letters, then turned and walked away. Her black ankle boots creaked rhythmically as she strode off. The gravel crunched. The latch clicked. She exited into the lane, disappearing behind a hedge of hawthorn and lilac.

Number 46. Mail. Bea’s voice was without inflection. Disengaging. Robotic. Specific. An economic use of words. But was it a statement or an observation? Was she talking to me or making a note to herself? I’ve shut the door now, but my heart is still pounding. What if she meant “Number 46: Male!” What if she was so impressed by my flat cap and tartan slippers that she was unable to speak further? What if, at this very moment, she’s talking to Mrs Dunnock next-door, asking her about the suave chap in the paisley pyjamas? Forget it Fennel. You’re a married man with the sexual allure of a frog sitting on an eggcup. Best that I move on and let my neighbours do the thinking. Time for me to get dressed, make a brew, and see what letters have arrived.

Today is a special day to read letters. It’s my last day at home before I return to the noise and bustle of an office. I’ve had it easy for the past year, working mostly from a tent by a lake, but tomorrow I must attend a meeting. Decisions are required. So my shirt is ironed, my shoes are polished; my hair’s cut short (to enable thick ears and pains in the neck) and war rations are allocated. First, though, I am a man of leisure about to unravel the mysteries of the postwoman’s bundle.

I’m now sitting in the kitchen, teacup in hand and breathing calmly. I’ve removed the elastic bands from the envelopes and have laid everything on the table before me.

The first letter is from a company selling modern bathroom suites. Their glossy tiles and chromed fittings would ruin the charm of our garden privy, so the letter is condemned to the kindling basket.

The second letter is for Mrs H; the third is for me, but has red typing on it, so I’ll let Mrs H deal with that one as well. (I remember Ted commenting on such a letter, saying, “Eee. Mrs Platt at the corner shop had one of those before she went away. And we’ve not seen her in a very…long…time.”)

The final two letters are what I’d hoped to receive. No harsh, typed lettering on the envelopes. No see-through plastic windows. No ‘postage paid’ printing. No indication of a computer masquerading as a human. Just ‘gentle’ handwriting that brings the envelopes to life. Blue ink on one and green ink on the other. I know that the colours of these inks are conscious decisions by their senders. They, unlike the computers spitting out thousands of cloned missives, have feelings. They care enough to be unique, take pride in sending letters, and know the true meaning of the term ‘first class’. And they’ve cared enough to write to me. They wish to correspond. And correspond they do. I can relate to their craft of writing letters by hand.

I will now begin a four-staged process of deduction. Firstly, I will attempt to recognise the handwriting on the envelope. Secondly, I shall guess the nature of the letter by feeling and smelling it. Is the paper textured and of quality weight? Are there any lumps indicating the inclusion of a feather, photograph or pressed leaf? Does it have the scent of pipe smoke, woodland floor or garden shed? Thirdly, what is the franking stamp on the envelope? What county, or country, is shown? Which friend lives there? Finally, I will gently slice open the envelopes with a knife from the cutlery drawer. (This is much more civilised than clicking ‘Send/Receive’ on an email. Think about it: send SLASH receive. Email is the frenzied killer of proper communication.)

The results of the deduction are as follows: The letter written in green ink has quality paper and is franked ‘Wigan’. I guessed correctly that it was from my friend Bill. It is a letter about a favourite childhood pond. The letter written in blue ink smells of pipe smoke. I guessed it was from my friend Demus, but was proved wrong. It is from Ted, our old postman. He informs me that he has retired to the coast and wishes to thank Mrs H and me for our friendship. He also wishes to make a confession. He’s saying… Oh. Ha! Ted. Only you would write such things. I’ll repeat them here, in his words:

“…and of course I had to leave in a hurry. I’d seen my replacement: a young lady from the city. She works the early rise and keeps her head down. Doesn’t stop until all’s been delivered. Alas, the thought of showing her my rounds was too much to bear. So I grabbed my bike and brought it here with me. It’d be no use to her anyway. That tyre’s not been firm in years...”

Ted, you old rogue. You’re as red-blooded and fearful as the rest of us. Nice touch, too, with your blue thoughts written in blue ink. But Beatrix is out of our league. For some reason, she makes me yearn to possess a bigger and stiffer…pen. 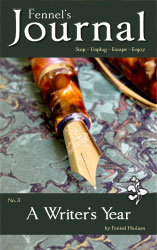 This is a sample chapter from Fennel's book A Writer's Year. ​