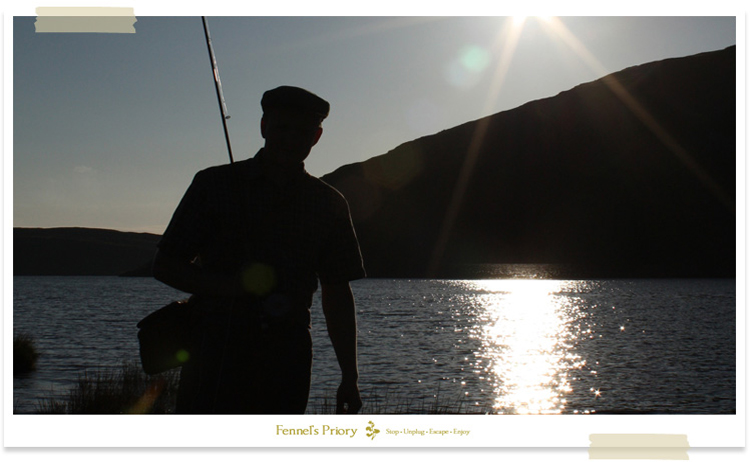 There's much publicity about 'rewilding' at present. It's a buzzword that covers many things. The new charity Rewilding Britain seeks the large scale return of habitats to their natural state and a reversal of human domestication on our environment. The charity's chief advocate is the journalist George Monbiot, whose book Feral has become the go-to reference on the subject of rewilding. It's had a huge impact on many people, including me. But not just for its environmental messages. You see, rewilding also applies to us humans. Thanks to our innovations and thirst for progress, we've become pampered and soft. We're the overweight moggy which cowers in fear of mice scurrying behind the skirting board. The thought of coming face-to-face with anything that might threaten our ability to dial for a pizza causes terror akin to missing our favourite soap opera. (Not so? Could you make a tapered leader from nothing but nettle stems?) Do we have the skills to survive the wild? Or are we wholeheartedly reliant upon the domestic system?

Survival experts debate whether their skills encourage reckless adventure or a deeper understanding and appreciation of nature. In one camp you have the SAS-type, diving from waterfalls and swinging on vines though the Amazon; in the other you have the bushcraft ambassador, keen to educate us about how indigenous peoples survive through the seasons. It’s the latter – especially the words of Ray Mears – who call to me. Speaking in an interview with the Guardian newspaper, he said: “I was trying to put right the damage done by Rambo. Everyone thought of this word ‘survival’ as aggressive, militaristic and rather stupid…I wanted to show that this knowledge was healthy…Once you teach people the value of trees and plants around them, they see them as friends, they feel connected to them and they feel responsibility for them and conservation ceases to be a crusade, it becomes a way of life.”

As flyfishers, we’re already connected with the outside world, but by ‘rewilding’ our sport I seek to strip away all the technology and home comforts that have crept into it. ‘A man amongst nature’, with just a fly rod and a thirst for adventure. That’s the plan.

You may recollect from Part 1 of this two-part investigation into the possibility of 'rewilding the flyfisher' that the idea was to bring together a team of survival experts who could help me to live wild for a week upon a remote mountain range in Wales, one with lakes and trout aplenty. We’d take minimal kit and record the experience for a television programme. Unfortunately for me, my A-Team was tied up filming elsewhere. This left me feeling like a television widow, shameful of my boast that I could survive alone in the wilderness. But, promises being what they are, I decided that I would head into the wilds. Alone.

My chosen location was the mountain range surrounding the Teifi Pools in mid-Wales. This is wild country, a landscape of mountains, moors and llyns covering 400 square miles. It’s barren and bleak, but with a wild charm that screams “Freedom!” The fishing is accessible by car but, as the ancient Greek Aristophanes wrote:

“Man cannot discover new oceans unless he has the courage to lose sight of the shore.”

So I ditched my car in a farmyard next to the main road and hiked seven miles to the lakes, ensuring the time spent walking freed my mind from the distractions and disinterests of a modern life.

My equipment for the trip consisted of an eight-piece travel rod, a reel loaded with 6-weight line, thee spools of tippet, two packets of hooks (size 12 and 14), a knife, a folding saw, a fire steel and tinder box, a waterproof poncho (that doubles as a tarpaulin), thirty feet of parachute cord, a rucksack containing a saucepan and Kelly kettle, a bedroll and a sleeping bag. Oh, and a camera, writing pad and pen. It weighed little and I felt a sense of Boy Scout invincibility as I hiked towards the mountains. But I was hopelessly underequipped and – contra to the Boy Scout motto – was desperately unprepared.

This, after all, was Wales: where three metres of rain can fall annually. While walking towards the lakes, rod in hand, I felt like a child carrying a kite towards a tornado. Water oozed up from the peat with my every step and gale-force winds pounded me from all directions. By the time I reached the pools, my poncho was doing little to protect me from rain that was ‘falling’ horizontally.

I managed to find shelter in the lee of a cliff adjacent to Llyn Hir: a long thin lake in the middle of the cluster of pools. Here I had two priorities: get warm, and get fishing. The first would require a makeshift camp and a fire; the second would require me to search for some fly-tying materials. Given that it was raining and that every ounce of firewood would be sodden, I opted to search for ‘feathers and fur’ which, by keeping me active, would also keep me warm.

An hour of searching produced three usable ‘finds’: a handful of sheep’s wool found hanging on some barbed wire; a crow’s feather that was floating at the edge of the lake; and a foil crisp packet discarded by a hillwalker. I had intentions of rolling the wool into a thread and creating a sort of ‘Baby Doll’ lure, or combing it straight with a stick and creating a white-haired streamer; or cutting the crisp packet into ribbons and using it as tinsel or silver ribbing; or using the crow feather as a hackle to make a crude ‘Black Spider’. These sounded great in theory, but with cold and soaking wet hands and no fly vice? Options were limited. Mine became desperate when I realised that I’d forgotten to bring any fly-tying thread. But with ingenuity and a minor sacrifice, I soon had plentiful supply after I cut and unravelled the thread from my right sock.

Pushing a size 12 longshank into the cork handle of my rod, and holding the rod between my knees, I was able to roughly whip some strands of wool and finely-sliced slithers of crisp packet onto the hook. It wasn’t pretty. It wasn’t matching any sort of hatch. But this ‘albino Christmas tree’ was my way of making the best of what was available. Soon I had three usable flies and a very floppy sock. I went straight to the downwind end of the lake and began casting.

Nothing. I repeat nothing happened. I fished for six hours, casting and walking; casting and cursing; walking and cursing; cursing and cursing. Not a pull, not a follow, not a fish. But then, on a blind and hopeless cast to the middle of the lake, the fly was snatched before I began to retrieve. The fish leapt from the water, pulled hard to my left, and then was gone. I was left nursing a limp line and an impotent ego. I fished on for another two hours, but without success.

Battling the elements was exhausting, and the biteless hours were disheartening. I found myself not wanting to fish. Rather I just wanted to be dry and warm. I retreated back to the lea of the cliff and made camp: a basic lean-to tarpaulin barely sturdy enough to withstand the ravages of the wind. I crawled under the tarp and into my sleeping bag. Cowering under the flapping nylon sheet, unable to sleep, with no fire to warm me and only the haunting whispers of yearned-for food for company, I lay there shivering and wishing I was elsewhere.

I was reminded of the words of Thoreau, who said:

“We should come home from adventures, and perils, and discoveries every day with new experience and character.”

Wise words. Although mine was an experience, and the endurance was character building, I found myself wanting only to ‘come home’.

This was an experiment. I’d sought to understand the relationship between flyfishing and the wild. And after only a day in the wilderness (albeit in extreme conditions) I was drawing conclusions that I hadn’t foreseen: that when it comes to surviving in the wild – where shelter, warmth and food are the priorities – fishing is third on the list and flyfishing consumes too much energy to be a viable technique (at least, when conditions are poor and the fish are proving difficult). Primitive man fished with handlines while foraging or setting traps far away from the lake. It worked for him for thousands of years. But I, as the evolved man, sought something different from my experience: I wanted to connect with the wild, to experience something real.

There, on the mountain and in the face of nature’s savagery, it was Modern Man who enabled me to fish. Neither the sheep, or barbed wire, or crisp packet, or nylon thread from the sock, were native to the mountain. They were put there by man. Ironically, they were my means to connect to the one thing that was truly wild: the trout.

In the end I did survive – surprisingly comfortably – for four days. The rain eased and my clothes dried out. I was able to make a better camp and get a fire going by whittling feather sticks from a fence post (it was wet on the outside and dry within). I mostly ate bilberries (wild blueberries) which were in abundance, and got drinking water by laying out my t-shirt in the rain – and later overnight to absorb dew – and sucking the water from it. (The mountain stream was brown/red with peat and tasted terrible). I tried earthworms which – to my surprise – tasted better raw than cooked – and caught two fish on the second day. That said, I ate the biggest imaginable portion of fish and chips in Tregaron on the way home!

Rewilding the human spirit can be achieved through flyfishing. The thing that the experiment taught me, above everything else, it that being alert – through terror or excitement – and responding to the intensity and challenges of life that exist in wild places – is the essence of the wild.

It’s the far-from-delicate balance between what we fear and what we relish: the heartbeat that quickens when we’re forced to live in the moment. A view from a mountaintop, the sound of woodland at dawn, a rise to a fly; they call to us with ferocious sublimity, quickening us to be real.

This article originally appeared in The Flyfishers' Journal, Winter 2015