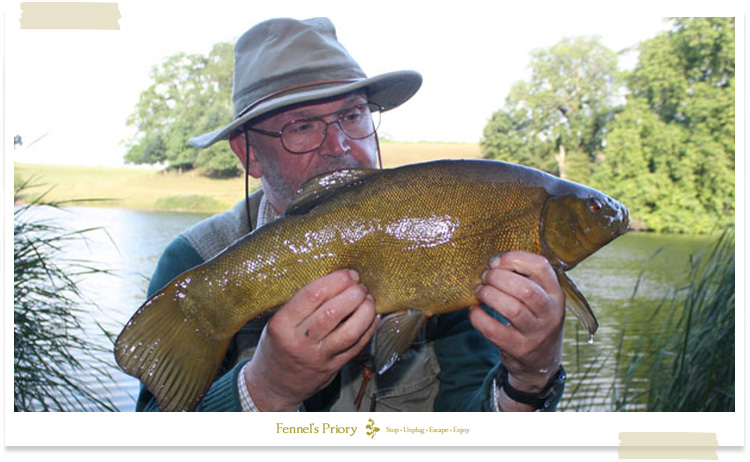 Some will say that being by water is sufficient to appease the needs of the angler-naturalist. This is only partly true. Whilst time alone can help us to look inward, to fish for things that others can’t see, time by the waterside in the company of friends can create our most cherished memories. My ‘opening night’ in June proved that an evening with close friends could create ‘the greatest memory I never had’. As my friend Isaac says, "The best catch in fishing is friendship”. This is why, once per year, I meet up with my old friend ‘Rollo’ Breakspear to fish the waters that were once local to both of us. Rollo’s a Midlands lad like me so we head to the waters of the Severn and Teme valleys. Our favourite venue is the estate lake at Dudmaston Hall in Shropshire. It provides our best adventures: perch in autumn, pike in winter and tench in summer. With a large country house reflected in twelve acres of reed- and lily-fringed water, it’s a classic venue for the traditional angler.

Perfect start to the season

Our trip this year was for tench, the species for which Dudmaston is most famous. Rollo and I met at first light in a clearing in the wood that grows between the lake and the Roman road to Bridgnorth. Here we could leave our cars, shoulder our tackle bags and walk the half-mile or so down through the woods to the lake. Rollo walked ahead, he being well-practised in dawn adventures, while I clunked and clanked behind him carrying the picnic hamper, kettle, parasol and portable drinks cabinet. (At least if felt like I was carrying all that. I made a mental note to bring less kit with me next time.) By the time we reached the lake I was huffing and wheezing like a walrus on a treadmill, but my breathing calmed as we stood, gazing out across the lake, looking through the mist and seeing clusters of bubbles pricking the surface of the water. The tench were feeding, and the lake was perfect. It was like seeing the ‘smiling’ eyes of one’s first love.

We chose to fish the southern bank of the lake where a line of reedmace fringes the margins. The water drops off quickly there so we’d be able to fish within six feet of the bank. With his swim prepared, Rollo cast out while I sat behind him drinking a cup of tea. (I prefer to sit and absorb the atmosphere of a water before tackling up.) The dawn was perfect, so misty and chilled but with blue skies overhead and a copper sun appearing on the horizon. I couldn’t focus on Rollo’s float for long. Soon I was gazing across the lake at the brightly illuminated treetops and watching the cattle come down to the water for their early morning drink. Soon I was chatting to Rollo about everything and nothing, putting the world to rights while, in between conversations, enjoying the contented silence that can only be shared between friends.

Rollo and I remarked how Dudmaston is the perfect setting for tench, and yet how under-fished it is compared to the canals, specimen lakes and match ponds of the area. We concluded that it was a sign of the times that many anglers prefer to angle where the fish grow largest, or where heavy stocking forces the fish to bite more often. Just a short drive away, a matchman’s horn or a cacophony of electric bleeps would be sounding the start of an altogether more frantic angling experience. Those styles of fishing, and those sorts of waters, are not for us. We prefer to fish in places that are quiet and undisturbed, where we can peacefully watch a float, see herons standing in the shallows and kingfishers dart across the lake. We’d seen all of these since arriving (also coots, mallards, moorhens, geese, and swans), and yet most folk would still be in bed. "To rise early,” said Rollo, "and experience a dawn chorus beside a lake, is something that everyone should do at least once in their lifetime.”

Rollo is one of the original members of the Golden Scale Club, a group of traditional anglers brought together by Chris Yates (who is also known by his club name Ferneyhough). Rollo was first known as ‘Rodmaker’ (he made a rod called The Bernithan Beauty which, being identifiable by its black reel fittings, can be seen in Ferney’s book Casting at the Sun) but Rollo got his new name after years of ‘active service’ rolling cigarettes for club members. "A craftsman to the end…” he jested.

"Fennel,” said Rollo, "as you know, so many traditional anglers think it’s all about the tackle, but it’s what’s on each end of the tackle that counts. Dr Johnson described angling as ‘a worm on one end and a fool at the other’, well here we are, or rather here am I, fishing with a worm. It’s a traditional bait, but one that’s becoming uncommon in modern angling.”

"No,” he replied, "but today an angler is more likely to be described as ‘a fool at one end and a hair-rigged Tutti Frutti boilie at the other’.”

I thought for a moment about what Rollo had said. An angler using worms today is more likely to be described as a fool, because worms are so unfashionable. Anglers nowadays prefer to use pre-packed baits full of preservatives, colorants and artificial flavours. These chemical pastes are like droppings left by the first super-rabbit sent to the moon. Mixed with eggs and boiled in a makeshift laboratory they become as hard as Dougal McGooliegun, the Glaswegian famed for driving rivets into a ship’s hull by using nothing but his pelvic thrust and a bottle of whisky.

"You’re talking about Dougals, aren’t you?” I asked.

"Dougals are one thing,” said Rollo, "it’s how they’re used that typifies a modern angler.”

"Oh, you mean a hair-rigged Dougal,” I replied. "The subject of much debate between traditionalists.”

(Anglers often assume that a hair rig, where the bait dangles below the hook on a fine thread, is a modern invention. But this method of attaching the bait was widely used in prehistoric times. You only have to look at the holes drilled into the shanks of bone hooks found in archaeological digs to see that early man knew the benefit of keeping the hook free from obstruction. But this was done at a time when man was fishing, hunting food rather than partaking in a sport. The sporting angler argues that a hair rig is unethical, for consider: a fish picks up a bait which is attached to a hook and line; it detects that something inedible is in its mouth. It spits it out, just like we would if we detected a human hair in a mouthful of food. The hair rig, however, is designed to hook the fish’s mouth as it attempts to spit out the bait. Does an angler deserve to catch the fish that would otherwise have evaded him? If he thinks he does, then he is deceived. He might as well use a net to scoop up the fish after it has ejected his bait. Hence why the purist will claim that one fish caught by a baited hook is worth ten caught on a hair rig.)

"Like them or not, hair rigs are a great way of catching fish,” replied Rollo, "but therein is the crux of the argument. Angling is a sport, with rules and ethics; fishing is the efficient harvesting of fish. The individual needs to decide if he is an angler or a fisherman, and then use the tactic’s he’s comfortable with. The trouble is when he becomes too competitive, and ruins everything for everyone.”

Fishing, as it used to be

Rollo explained that his comments about modern angling were due to some recent incidents at a local big carp fishery, which had resulted in him choosing to leave the syndicate that fished there. He went on to say, "All the anglers were casting heavy leads to the far bank, and then retiring to their bivvies to await the action. Trouble was that few of them were catching. I sat and watched, and observed that the anglers were troubled with ducks diving on and eating their baits. To overcome this, the anglers were piling bucket-loads of maize into the nearside margin. Seemed they didn’t mind the ducks feeding at their feet so long as the other bank was left alone. I figured that the carp must also be feeding on the maize, so I decided to fish at night, using one rod, a float, and some maize. It was simple, traditional angling. The carp obliged and pretty soon I was getting all sorts of abuse from the syndicate. They just couldn’t cope with a floppy-hatted traditionalist out-catching everyone else. I had to retreat. Thankfully we have waters like Dudmaston where the angling is relaxed, just as it used to be.”

The magic of angling

Hearing Rollo’s story confirmed my belief that Dr Johnson had got it wrong. There’s no fool on the end of a line when a worm’s being used. The only fool is he who can’t share in the enjoyment of others’ successes. Unfortunately, this mentality is encouraged by the competitive nature of modern angling, which seems to be facing an imminent implosion, or prolonged dementia. It seems to have forgotten what the sport is really about. Angling is a small part of a broader existence, not something that should become the be-all and end-all of life.

It’s by angling with friends like Rollo, at classic places like Dudmaston, that reminds us why the sport is so appealing. It’s not about results or one-upmanship; it’s about time spent in natural surroundings, in good company, with a chance – rather than expectation – of catching a fish. If we’re lucky, we might connect with something even more magical; we might find a part of ourselves hidden away in the twilight. 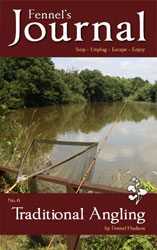 This is a sample chapter from Fennel's book Traditional Angling.