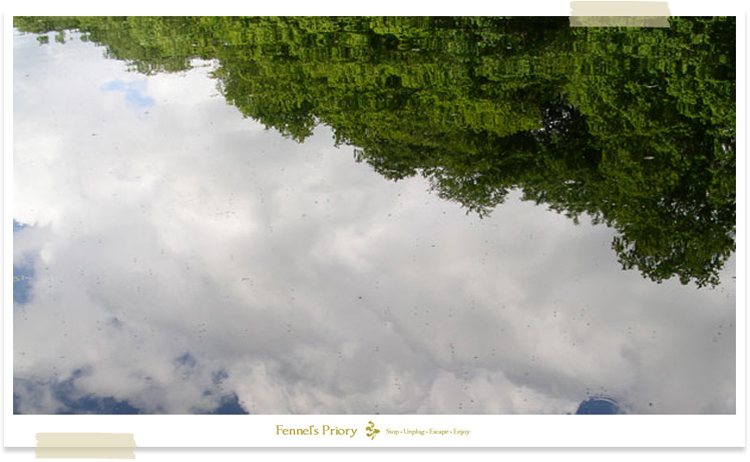 Afloat in a Punt

The lake (where I've been living these past months) seems today to be bigger, brighter, and more expansive. I can see blue skies and a dazzling sun framed by cumulous cloud. In my peripheral vision I can just make out a ring of treetops and a cloud of dust rising from behind a combine harvester that rattles across a nearby field. This unique view of the pool is formed because I am lying face up on the floor of an old wooden punt. A punt that is drifting ever-so-slowly across the pool. I can hear water lapping against its sides, but I cannot see it. The dark, aged timbers of the punt serve as blinkers that force my sight upwards to the sky.

I’ve been lying here for about two hours. It may be longer. Time isn’t important. I’m enjoying a spontaneous moment that has no purpose other than to let my body and mind drift in an idle and dreamy state.

Corporate folk might suggest that I’m being lazy, that I should have something more productive to do with my afternoon. But resting here ‘doing nothing’ seems the right thing to do on such a beautiful summer’s day. The act is rewarding in its own pointlessness.

Actually, my being in the punt did at first have purpose. I boarded it to fish for roach, which I’d seen dimpling the surface at the centre of the pool. (At least that was my excuse when I skipped breakfast in favour of a paddle about the lake.) And I did fish, for a while, catching eight roach on fly-tackle before the mist rolled from the water and the sun rose into the sky. As the day grew hotter, I opted to ignore the shade beneath the trees and stay here, sweltering in nothing but yesterday’s undies, lying on the boards of the punt, drifting to wherever the air currents took me. And after so long being still, I feel like I am capable of moving no quicker than ivy growing over a rock.

Lying in the punt, and drifting so slowly, gives me a feeling of weightlessness, as if I am floating not on water but in mid-air, held as if between two opposing magnetic fields. But there is no opposition here, and no conflict. I am alone once more at the lake. The last of the anglers has departed, bored, I guess, with the lack of carp activity during this minor heat wave. Or, as I’m now beginning to think, that he ran out of petrol for his electric generator. (Oh how I won’t miss the constant ‘tat-tat-tat-tat-tat’ from the generator and the ‘dum-dum-dum-dum-duddy-dadudum’ from his portable television at 8pm each weeknight.)

I’ve been living a secretive life for too long, staying out of the way of anglers and doing my best to maintain a solitary existence (other than for Mrs H-to-be’s visits, of course). I doubt whether any of the anglers, other than Mr Pot Noodle, knew I was here. And so I am making the most of having the lake to myself again by idling in the punt and cooking like a sausage on a barbecue.

There are times in one’s life when it is best to stay hidden from view, moments that should not be disturbed, else the magic is lost.

This is one of them. I am reassuringly hidden, so it needn’t matter if the anglers were here. A passer-by would conclude that the punt had broken free of its moorings and was drifting like the Mary Celeste towards a distant shore. So there will be no disturbances for me. I am free to idle my time gazing at the blue skies and spotting faces in the clouds. (I’ve seen a convincing Winston Churchill and a cloud that looked like a fat woman poking her tongue through a Polo mint. One cloud reminded me of a well-risen Yorkshire pudding, while another looked like a well-filled bra. Maybe I’ve been alone for too long, or that these are signs that I will one day be served Sunday lunch by a waitress with an ample bosom and a face for radio?)

A flock of racing pigeons has just hurtled overhead, startling my vision into a sharper, less dreamier focus. (That buxom cloud has just burst in two. My mind boggles…)

There is something eternally satisfying about lying motionless for hours on end, watching the world move around me like the shadow on a sundial. I think back to my childhood and all those ‘misspent’ hours lying in the grass looking up at the sky, imagining that the swifts tumbling overhead were Spitfires engaged in aerial dogfight, and thinking that the whole world was way too spectacular for my young mind to comprehend. Then came the time when the angle of my neck straightened and it was no longer acceptable to spend the day gazing up at the sky, or doing anything reminiscent of child-like dreaming. Yet throughout history people have gazed at the skies in wonder. You only have to stand at the base of a church steeple to understand why.

Those who prefer to stare at the ground, checking their shoes or kicking their heels, sadden me and make me want to turn the floor into a giant mirror. Their focus is so much closer, their vision smaller and less interesting. Whether by choice or circumstance, they exist in a closeted world. Some may have purposeful strides, but they see little of their journey.

"Stop and Unplug,” say I; "look around you, at the vastness and greatness of the natural world.” Some stop. Others need binoculars to tie their shoelaces.

Enough observations. What’s here and now is important. This hot afternoon in August, that might see me dive from the punt and swim to shore, is here for a purpose. To teach me that doing nothing can be as rewarding as doing something. And that doing very little can be as productive, in a creative sense, as doing a lot.

Which makes me realise that I’m too comfortable to go for that swim. I’ll probably lie here for the rest of the day. (Great term, that, ‘rest of the day’.) I’m in no hurry to do anything. My stomach hasn’t started rumbling yet and I have no desire to return to the tent. But wait a minute. There’s a cloud over there that looks like a baby’s bottom. If it rains, I’m off!

This is a sample chapter from A Waterside Year, Fennel's Journal No. 2