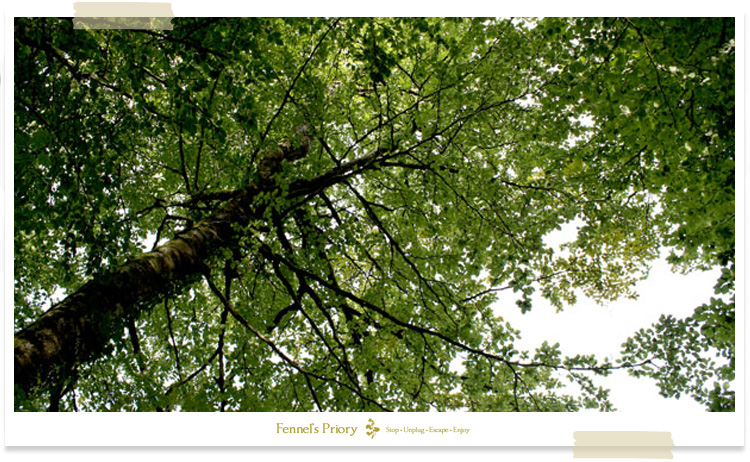 The Company of Trees

Jasper Carrott once jested that Tree Surgeons have the most pretentious job title in the world. "They’re blummin’ gardeners,” he joked. "What next? Plumbers calling themselves U-Bend Gynaecologists?” I can see his point. Watch a Tree Surgeon in action and although you’ll see plenty of skill and precision, there’s not a scalpel in sight. Instead, a chainsaw rips into limbs that cannot flinch. (A tree cannot scream, and doesn’t feel pain like we do, but if it did, there’d definitely be the need for ‘Tree Anaesthetists’. Or, in plain English, bigger earmuffs.)

I’ve never worked as a Tree Surgeon, although I’ve felled and pruned plenty of trees. For 18 years I worked as a gardener, and proudly so. There was no need for pretention (except for three years post-graduation when I called myself a ‘landscape architect’). I shovelled manure onto rose borders, got soaked when it rained and got chilblains and frostbite in winter. It was manual work. Poorly paid (in monetary terms) and the sort of occupation that kills conversation at dinner parties. But for all its associations with weed grubbing and dirty fingernails, I regard my time as a gardener as the happiest of my professional life. It was my vocation, my calling; an opportunity to spend every day in the fresh air, doing work that changed with the seasons, and being alone but for the company of plants.

The most valuable thing I learned during my time as a gardener (and my four years at horticultural college) was the importance of working in harmony with Nature.

For example, if I was called to work on a new garden (or, for that matter, a municipal ground or large landscape) then the first thing I’d look at was what occurred there naturally. What soil type was there? What degree of drainage? What aspect to the sun and exposure to wind? But most importantly of all, what plant species were present?

A garden next door will tell us what plants can be grown, but the trees, shrubs and herbaceous plants growing wild will tell us what should be grown. It’s the wild plants of roadside, meadow and woodland that give us the best indication of what will grow naturally in an area. A skilled gardener or landscape designer will work with this to ensure that whatever plants they choose complement the natural flora. You just don’t want things to die or look out of place. For consider how odd it would look to plant a pampas grass in the middle of a beech wood. You’d know straight away that someone had planted it. But if you randomly planted some bluebell bulbs, then when they flowered you’d think that they’d been there all along. They would be at home in their environment. As Wordsworth wrote, "Come forth into the light of things, let nature be your teacher”.

Harmony between species can be easily observed in mature deciduous woodland. This is where you’ll find the greatest diversity of plants, fungi and animals living together and where we can sit amongst something that’s considerably older and bigger than us; where we can feel part of something beautiful.

As Jane Austin wrote, "To sit in the shade on a fine day and look upon verdure is the most perfect refreshment”. I couldn’t agree with her more. In fact, it’s time for me to buy a T-Shirt printed with "Trees Give Me Wood” and then go in search of some full-on tree hugging action.

It’s now three hours and many bark-smooching moments later. I’m relaxing (in almost post-coital bliss) against the trunk of a beech tree at the edge of Priory Wood. It’s a classic spring scene: a wood fringed by a meadow of flowering dandelions, buttercups, red clover, nettles, field poppies, comfrey, rye grass, fescue and ragged robin; the edges of the wood cascade with white May blossom and the yellow-green leaves of field maples; within the wood are flowering celandines, primroses, garlic mustard, arum, and a carpet of wild garlic. But it’s the trees we’re here to see.

In front of me are several beech trees, as you’d expect on the limestone escarpment of the Cotswolds. Their root systems are suited to the shallow chalky soil above the bedrock. But the wood is mostly made up of oak trees, so I assume the bedrock is fissured enough for the tap roots of the oaks to get a firm anchor. There are also ash and yew trees and, further towards the edge of the wood, hawthorn, field maple, silver birch, hazel and elder (although, technically speaking, elders are shrubs not trees). I’ve listed these trees individually to give you an idea of the diversity of the wood, but it’s best not to view a wood as a collection of individual trees, rather a symbiosis of many organisms (so said Mr Bolt, my school biology teacher).

A wood is a living thing. Both beneath and above the ground, and especially up in the canopy where, at the moment, a dozen or more birds are singing.

(Given the non-descriptive nature of last month’s bird notes, I’ll document that I can hear ‘the flute-like whistle’  of blackbirds, the ‘careless rapture’ of a song thrush, the spiralling and somewhat self-centred "chirichiri chereeep cheroo, finch!” of  chaffinches, plus many other "scee-seees” and "chhrrrs” from
great tits and blue tits.)

The casual observer might think that only the birds and I are talking. But they’d be wrong. Trees speak, too, and in many ways, the most obvious being the susurration of their leaves – which is a good indicator of the weather outside. (A woodland has its own microclimate – warm in winter and cool in summer.) But place your ear to the trunk of a tree on a windy day and you’ll hear all sorts of clunking and groaning going on, rather like the noises within an old-fashioned windmill (the working type, not ones  converted into holiday accommodation for amorous pensioners). I shouldn’t jest. The trees in this wood are old and deserve respect. The beech and oak have been growing here for over two hundred years, and the yew is older still. Even the hazel, which has been coppiced over the centuries, could tell us how the locals responded to the Industrial Revolution. (Coppicing is evidence that a ‘wild wood’ is not as wild as we think, but has been managed or nurtured by man.)

Trees have seen so much change and yet keep on going, doing what they do and providing us with oxygen, while we mammals scurry about beneath them busying ourselves with things that are mostly nuts. The trees around us have not only seen much of history, they’ve played a part in it too, which is why they deserve our respect. Take oak trees for example. They are the most common and easily recognised tree in Britain. It’s our National Emblem, too. We can thank the National Trust logo for that. Actually, no. I made that up. The person we should thank is King Charles II, who hid in an oak tree to escape his parliamentarian pursuers during the English Civil War. (The tree remains and is known as The Royal Oak, which has spurred countless pub names.) Thanks should also go to Admiral Lord Nelson, that fine leader of men who has, for the past 168 years, being standing on a column in London, waiting for a ladder. He’s the man who lost the sight in his right eye at the Siege of Calvi in 1794 (as they say, he didn’t see that coming) but, progressively bad jokes aside, he did foresee the future lack of English oak trees to make wooden warships (it took 6,000 oak trees – about fifty acres worth – to make one ship). In 1802 Nelson recommended to Parliament that oaks be planted in the Dean area of Gloucestershire (now the Forest of Dean). The rest, as they say, is history.

Yew trees are the most special of all. Regarded as being extraordinarily sacred by the Celts, and thought to symbolise death and resurrection by early Christians, they are often found in churchyards. Some were planted as a symbol of faith (and depending on your history teacher, to ward off evil spirits) but most of them actually pre-date the church that stands alongside them (the church being located at a pre-Christian sacred site). Yews are very slow growing (an inch or two per year) and can live for many thousands of years. (The oldest yew in Britain – the Fortingall Yew – is estimated as being 2,000-4,000 years old). The ones in this wood, however, are mere youngsters, being only three hundred years old. But the real whippersnappers are the birch trees, which are barely thirty years old. Birch grows quickly and dies young. (The quicker the growth of a tree, and softer its wood, the easier it is for rot to set in; hence why the average lifetime of a birch is just fifty years.)

This isn’t meant to be a history lesson, merely a statement of the character of this wood. And, given the tranquillity of this place, I now realise that I’ve done too much talking. Woods are meant to be quiet.