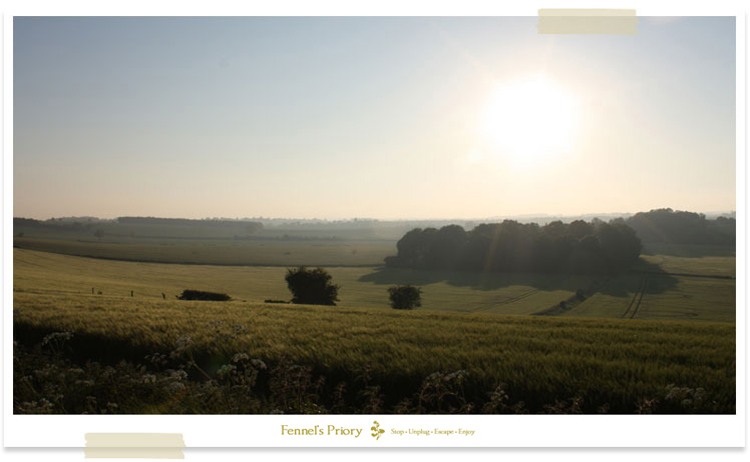 The Air We Breathe

"Houses have but three functions: to keep us warm, dry and secure. Anything regarding character or location is incidental.” So said a friend of mine as he and I viewed Number 12, Turnpike Avenue. It was to become the eighth property in his mortgage-free portfolio. (Nice position to be in, eh? Mrs H and I are struggling to pay for one house, let alone eight.) But I could never agree with his words, even though his properties were all buy-to-let. A house has to have soul for it to become a home, and for that, one has to love it.

I was reminded of my friend’s words last night while watching one of those Grand Designs programmes on television. Mr and Mrs Designer Everything had no kids, no pets and no desire to acknowledge that they were over forty. They’d left the city and bought a green field site in the Cotswolds that overlooked miles upon miles of farm fields, woodlands and a river valley. I nearly dropped my Stilton and crackers when I saw the location. It was the countryman’s dream: an opportunity to live a rural life with no immediate neighbours, no light pollution and no traffic noise. The site was crying out for a Cotswold Stone farmhouse. But what did they choose to build? A subterranean, concrete- and glass-walled ‘bunker’ with no carpets, no soft furnishings and no views. It looked like the reception lounge to an underground nuclear silo. But they liked it. And after much ‘munching on my Jacob’s’ I concluded that it was they who had to live in it, not me.

What puzzled me was that this was a passive home. I’d never heard of such a thing before. At first, I thought it was somewhere a peace-loving vegetarian would talk nicely to a walnut before taking it outside and smashing its head in. But soon I learned that a passive home is an airtight building. It doesn’t lose heat like a normal house, through offensive things like air vents, letterboxes, or windows that open. It is ‘super-efficient’, with the air inside being heated by sunlight which enters through vast curtainless windows. The air is then pumped around the house before being mixed with fresh air that’s sucked in from outside. The stale air exits via a one-way pipe and the new air helps to freshen the place up a bit. (Sounds rather restrictive. Whatever next? Clothing regulations? Airtight ‘passive’ pants?) The whole thing reminded me of my student days when, in an attempt to save money for beer, my four flatmates and I spent a month eating nothing but baked beans, tinned tuna and boiled cabbage. Passive? Pass out more like.

I accept that these soon-to-be troglodytes may have had planning restrictions forced upon their home ("Your proposed design is not in keeping with the rural aesthetic. We suggest you bury it”) and that they may have found the transition from city to sticks a bit daunting, but what was the point of them living in the countryside if they had no desire to engage with it? They should at least have wanted to look at it, even if they could never bring themselves to muddy their shoes.

The Office of National Statistics reported last year that 250,000 people left London (replaced by 200,000 moving in), which tells us that many people are going in search of something different. If they were fortunate enough to move to a place where they could live without compromise, then why would they seek to live in ignorance of their surroundings? (This applies equally to someone in the city as in the country.) The house on the television last night was the ‘passive’ equivalent of an ostrich sticking its head into the sand (or, given the likely smell, sticking it somewhere equally dark but a bit more ‘chewy’). I thought the whole point of moving to the country was to get fresh air and savour an outdoor existence? Sadly, modern lifestyles are luring us indoors.

These days we spend so long sitting in our centrally heated houses and air-conditioned cars that it’s easy for us to forget what it feels like to be outdoors.

It would be all-too-simple to forget basic, natural, pleasures such as feeling a breeze on our face or looking up at a leaden sky and feeling the cool tickling of raindrops upon our skin, or seeing water droplets form on our clothes when we walk in the mist, or feeling the crunch of snow under our feet, or, simplest of pleasures, lying amongst the daisies on a sunny day and watching the clouds drift overhead. Instead, we (and especially the next generation) run the risk of becoming creatures of the shade: sad, grey-skinned beings with bulging unblinking eyes.

I’m passionate about quality of life, especially when seen in the context of the modern world which, when viewed through the eyes of a traditionalist, has gone mad.

Food is shipped halfway round the planet because people have forgotten the joys of seasonal produce; people (including me) work relentlessly to make ends meet; they become tired and reliant upon satellile instruction to guide them from  A to B; children play virtual sports indoors rather than heading to green and life-giving fields; families watch wildlife programmes on television rather than venturing outdoors to discover things for themselves. They live blissfully in a cocoon of convenience, where everything is streamed, broadcast or delivered to their door. They don’t need to open a window to get fresh air; they just spray an aerosol of ‘Spring Meadows’ around the room while waiting for the microwave to blitz a Calorific Pizza.

Of course, I have to include myself in this broad-brush condemnation of modern life. I’ll eat a pizza with the best of them and I tend to work longer hours than I should. (I’ve also been known to spend entire weekends watching The Simpsons.) But I have a promise to uphold, so I’ve got to take the high ground, even if I’m the person of whom I’m most critical. I think again of those city dwellers on television who became ground dwellers, all in an act of wanting to be free but, like a budgie in a cage, not knowing how to fly when the door was finally opened. Theirs is a classic example of the relationship between wildlife, The Quiet Fields, and Man. Many people like the thought of a quiet life, but lack the ability to slow down and catch their breath.

The Quiet Fields are not for everyone. They’re not meant to be. If they were, they would no longer be quiet and we’d have to seek our escape in the deserted city streets.

They call to some, but not others. Some people draw their energy from social events, but those who seek a quiet life need time away from people, among the plants and animals of a natural world.

‘Being’ outdoors requires us to do more than open the curtains. Many people push their faces to the window in an attempt to get closer, to see things more clearly; they don’t realise that from the other side, their faces are contorted, pressed against smeared glass. They’re too busy looking out, and not busy enough looking in. If they did, then they might find their way to unlatching the window or opening the door. And when they did, they’d realise that the door is not an exit, but an entrance. To the real world.