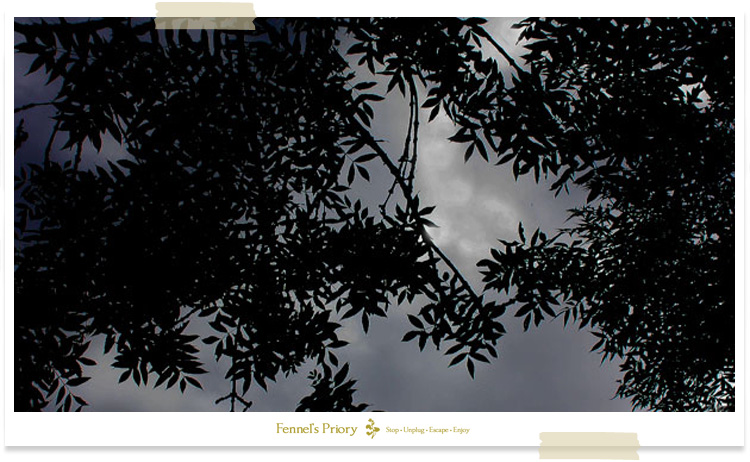 I’m rather late in writing this chapter. I could blame the Game Fair, or summer holidays, or the start of the grouse season; perhaps even that rusty-ankled blue-rinser of a driver I got stuck behind on the A40 last Sunday. But the real reason this diary is delayed is because, since the last chapter was penned, I have lost my sight.

The deterioration of my vision began slowly – a ‘gradual dimming’ that built until I couldn’t see anything close up and my distant view was just a darkened mass of blurred silhouettes. But losing one’s sight isn’t all that bad. It enhances one’s other senses and gives us an excuse to wear sunglasses indoors. So before you rush out and buy me a card showing a jaundiced frog and a caption saying, "It’s Not Time to Croak!” I ask that you give me some time to enjoy the experience of blindness. But don’t worry. My lack of sight is only temporary. It only lasts for nine hours. Which is about right for the time of year.

You see (excuse the pun) I am writing this at night, beside the river near to my home. I have no torch or candle, just a pen and pad and whatever ‘night sense’ I can muster. I’m writing by feeling my way along the page and starting a new line when my pen falls off the edge of the pad. My handwriting will be terrible (no change there) but I’m free to tilt my head and listen, or smell, or touch, or feel what’s going on around me.

It was the actress Catherine O’Hara who said, "Night time is really the best time to work. All the ideas are there to be yours because everyone else is asleep”. I like this. It makes me feel extra creative. I almost always write at night, or in the early hours, but there’s a fundamental shift in creativity that occurs when one writes outdoors. Being outside at night, even more so than during the day, allows me to blend into my surroundings and observe things undisturbed. I’m more ‘aware’, even though I know that most things are sleeping. But there is life at night. And I’m here observing it, while many are sleeping. I feel like I’m tiptoeing through dreams in search of the ‘darkness that illuminates’.

Robert Louis Stevenson wrote, "Night is a dead monotonous period under a roof; but in the open world it passes lightly, with its stars and dews and perfumes, and the hours are marked by changes in the face of Nature. What seems a kind of temporal death to people choked between walls and curtains, is only a light and living slumber to the man who sleeps afield”. But I’m not sleeping. I’m sitting on my coat, with a writing pad upon me knee, penning these words. I couldn’t possibly sleep. There’s just too much that would otherwise be missed.

I arrived here just after 8.00pm. (I knew the time, even though I wasn’t carrying a watch, as the theme tune to Coronation Street was playing as I passed the local farmhouse.) The shapes and forms of things were softened and dimmed by a low cloud and setting* sun. I was supposed to be enjoying a dusk walk along the river, spotting bats and owls that work the water meadow and riverside willows in the gloaming. But I got to a place above the weir where the air was humid and warm and the willow leaves were unrustled by the final yawns of day. It was the perfect place in which to sit, write, think, and ‘melt’ into the riverbank as light faded. Here I would experience the transition between diurnal and nocturnal: the twilight or crepuscular hour, and then adventure beyond the limits of sight.

*Because the Earth rotates on its axis, rather than the Sun rotating around the Earth, there’s no such thing as a ‘Sun Set’, rather an ‘Earth Rise’. Considering this new term, it brings great optimism for the night: a time of Earth Shadow, where the Sun’s rays no longer warm us, and we are able to look up into the splendour of the star-filled heavens to appreciate our place in the universe.

There was a time when the thought of sitting beside a river at night, without holding a fishing rod, would have made me laugh or frown. But those times are gone. A pen replaced the rod long ago, and now I’m more content to sit here and observe things than disrupt their natural passage. Thirty years of angling have, however, made me familiar with this scene, which brings me comfort at a time when others might feel scared. After all, isn’t it supposed to be dangerous to go out at night?

The Saxon term for night was ‘Death Mist’. It highlighted their respect for the danger of night, of marauding tribes or dangerous beasts that lurk in the shadows. Maybe this fear still exists deep within us, that there is something not of this world that’s born in darkness? For consider: séances are commonly performed at midnight, and sightings of ghosts are more common at night.

Whether you love or fear the night, dark hours are only temporary. Light returns (on average, fifty minutes before the sun is visible on the horizon – because of the refraction of its rays through the Earth’s atmosphere) so daylight tends to win favour and bring us joy when we wake. But that time is five hours away. For now, the world is bathed in deepest blue.

I’d guess that it is now gone midnight. Any sound from nearby houses is silenced, replaced by a gentle trickling of water from the river. I’ve been here for so long that my joints ache from the dampness and my backside is numb from the cold earth upon which my jacket is draped. I ought to be wearing the coat, given the coldness of the night, but that would contradict why I’m here. I want to be cold and damp. Wearing a coat now would be like sunbathing indoors on a hot day. Yes I’m shivering, but I feel connected. I can place my hand on the ground, feel the smooth, sensuous, and slightly dewy stems of grass; or run my fingertips across the coarse but warm bark of the willow to my right. I can breathe deeply and smell the marshy scents of the river mingling with the sweet fragrance of water mint and the bitter aroma of nettles, carried across the meadow by mist that’s forming behind me.

The earth ‘breathes’ during the night, exhaling as it relaxes from the day’s exertions. Those who experience wild places at night know this.

Tthe botanist within me knows that plants don’t transpire at night (they close the stomata in their leaves to conserve water while they’re not photosynthesising). The countryman within me, however, knows that night scents are more potent than those of the day. Take honeysuckle, for example. It releases its scent at dusk to attract moths, whose long tongues can reach the precious nectar at the end of the tubular flowers. And then there is animal musk, like that from fox and badger, which lingers at night and scrunches the nose of the nocturnal adventurer. And ultimately the scents of the earth – of rich humus, water and soil – rise into the air at night (also after a downpour of rain), making us realise that they are the true ‘essence’ of life. When experiencing these nocturnal scents, a person would need to have bricked up nostrils, double-glazed eyeballs, and ‘centrally cheated’ veins not to connect with the ancestral countryman within them – the person who felt, and still craves to feel, every change in the weather and the seasons.

What do I conclude, therefore, after my time beside this nocturnal river? It is the same as written by the American naturalist Henry Beston:

"Learn to reverence night and to put away the vulgar fear of it, for, with the banishment of night from the experience of man, there vanishes as well a religious emotion, a poetic mood, which gives depth to the adventure of humanity”.

With adventures into the countryside being the most real and meaningful we are likely to experience, we should savour and respect our outdoor places – especially at night. They free us from the obviousness of our daytime paths, and reconnect us with an inner spirit – that yearns to be free.