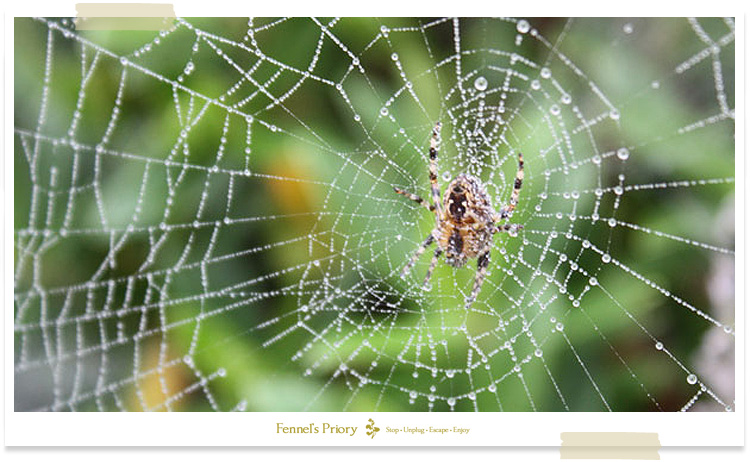 "Do you understand how there could be any writing in a spider’s web? …when the words appeared, everyone said they were a miracle. But nobody pointed out that the web itself is a miracle.”

There are two things in life about which we can be certain:

Sadly, as we grow older, it’s the second point that most frequently astounds us.

I was reminded of this fact today when, during my daughter’s pre-nursery ‘tick-tock’ fly-casting tuition on our front lawn, she cast her fly (a piece of bright orange wool) over towards the garden hedge.

‘There!’ she remarked, pointing her rod tip to the dewy leaves of privet. ‘Spiders!’

‘Ah yes,’ I replied, seeing the dew-speckled floss of gossamer. ‘Cobwebs, they’re little hammocks made by fairies during the night.  It’s hard work for them, climbing their long ladders and dabbing the sky with sparkly star paint. So when they get sleepy and need to rest, they lie down over there and dream of the magic that’s done while little girls are sleeping.’

‘No, no!’ she shouted, her index finger waving from side to side. ‘Silly Daddeee! Fairies don’t need ladders, they’ve got wings! And those aren’t hammocks. They’re houses for spiders!’

My daughter, who is affectionately known as Little Lady, is only two years old, but already she can count to twenty, complete a 75-piece jigsaw puzzle in less than fifteen minutes, identify the common spring wildflowers and, great pride of the family, shouts loudly at the television each Saturday night proclaiming the singers on The X Factor to be ‘Utter Rubbeeeesh!’ Also, as I learned today, she has a better understanding of arachnology than me.

‘Did you learn that at nursery?’ I enquired. ‘Have you been reading Charlotte’s Web?’

‘No Daddeee!’ replied Little Lady. ‘Those webs are where spiders live, don’t they? Incy-wincy money spiders that are very, very lucky!’

‘In what way?’ I enquired, half knowing what was coming next.

‘There, look!’ She shouted, pointing at the webs along the hedge. ‘One, two, three-four-five.’

‘Five what?’ I asked, as I knelt down beside her.

I looked at Little Lady, whose face was beaming with angelic radiance. She reached for my hand and squeezed it gently, then said, ‘I like fifty-pees best. Five fifty-pees, pleeese.’

‘That’s two pounds-fifty!’ I exclaimed, standing up with a start.

‘Yes please. Waiting!’ She said, as she folded her arms.

I reached into my pocket and handed Little Lady five twenty-pence pieces. She gave me a look that said ‘Is that all you got?’ and then dropped the fishing rod and ran into the house, shouting, ‘I want more!’

Standing on the lawn, in full view of my neighbours (and, most probably, several families of disapproving spiders) I realised that my lack of knowledge about eight-legged creatures, and my ineffective negotiation technique, had landed me in a web of trouble with a two-year-old. One where the only escape would see me forking out another one-pound-fifty and saying, ‘Sorry Sweetheart, I will do better next time.’ How could this happen? I’m the adult. The one wise with worldly knowledge and the experience of age, who should at least be in charge. Forget Charlotte’s Web, this was more Charlie’s Web. I was a ‘right Charlie’ for being stitched up by my daughter and her silk-spinning friends.

Something had to be done. I quickly went inside and fetched a camera, returning to the garden to take my best Peter Parker photo of a spider in a web. I then went back inside, into my study, where I consulted the dusty shelf of my library that’s titled ‘Big Bugs and Creepy Crawlies That Could Quite Possibly Eat Me’. There, I knew from distant memory, were three books that discussed the facts and habits of our spout-climbing friends. What I found within their pages had me swearing that I’d never again sit on a tussock, eating curds and whey.

Spiders, as I discovered, are not insects. They are arachnids.

The difference, the books told me, is that insects have antennae and six legs, and spiders lack antennae and have eight legs. They belong to the same family that includes scorpions, mites, and ticks, and are found on every continent except Antarctica. There are 40,000 different species, of which over 600 live in the UK. The largest spider in the world is the Giant Huntsman, which has a leg-span of 12-inches. (Imagine that landing your face in the middle of the night!) But in the UK a spider with a three inch leg-span is about as big as we should expect.

Spiders produce silk from glands called spinnerets. Each gland produces silk of different properties, which hardens upon contact with air. (Spider’s silk is five times stronger than steel of the same diameter.) Silk is used to create webs and catch prey (most commonly seen in use by the orb web spider, which detects vibrations in the web caused by a trapped insect and then rushes over to paralyse it). It is also used as swathing silk to immobilise prey, and knitted together to create egg sacks and shelters. Spiders are also known to dangle on long lines of silk, waiting for the wind to blow and ‘balloon’ them many miles from their original home.

The webs that Little Lady observed this morning – which looked like miniature cotton wool blankets draped on the hedge – were indeed created by money spiders, the most numerous of all British spiders (representing forty per cent of the British spider fauna). An acre of meadow in autumn is likely to contain over a million-and-a-half of these tiny spiders, which grow to a tenth of an inch in length. Theirs is not a sticky web. Instead, it wraps itself around the prey. I was wrong to call it a cobweb. Cobwebs, the books informed me, are created when dust settles on abandoned spiders’ webs. So they are more likely to be seen indoors than on a dewy hedge.

Autumn is the spider’s breeding season. That’s why we see so many of them at this time of year. The fat ones are females who’ve plumped up to attract a mate. The ones in our houses are mostly males looking for a lady-friend. It’s a hard life if you’re one of these indoor-adventuring gigolos. If you evade getting sucked up by the hoover or flushed down the loo, then you may have to build an intricate silk boudoir in which to court your lady, only to have her scoff you as her post-deed snack. How would she do this? Well, she’d grab you, crush or paralyse you, wrap you in silk, and then inject you with a protein-dissolving liquid that turns your innards to mush. (Forget ‘bunny boiler’, these eight-legged females mean business!) She’d then sit back with a cigarette in one hand and a straw in the other, and slurp you up from inside. (Puts a whole new slant on the term ‘Fancy a nibble,’ doesn’t it?) We can’t blame her though. She’s just doing what comes naturally. All spiders are predators, with many eating their own kind.

And the freakiest thing I learned about spiders? Well, each of their legs has six knee joints. That’s 48 knees per spider. So if you’re holding a party, and notice Old Arachny, don’t scream. Instead, raise a glass. Not to trap it, but to toast its presence. It’s there to ‘weave in’ a little atmosphere. After all, it knows better than we do about holding a ‘knees up’. Just watch out for the little ones. They’ll cost you money!