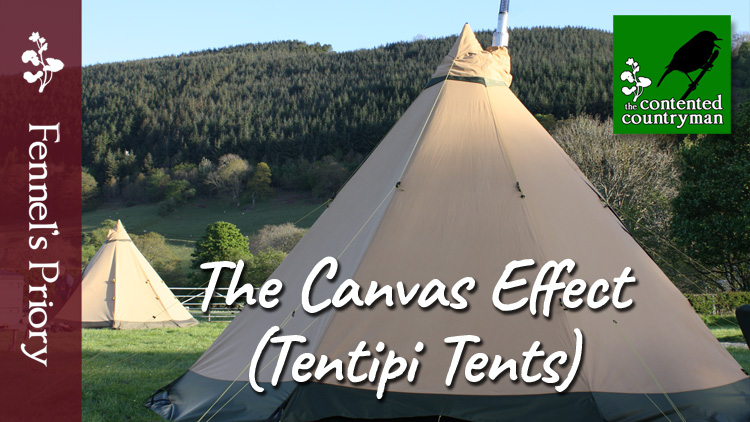 Fennel reads from his book 'Fine Things', telling the funny story of how he came to discover and purchase his ultimate tent: a Tentipi Safir CP.

Transcript of The Contented Countryman Podcast

Five years ago I spent the best part of a year living in a tent beside a lake in Worcestershire. You’d think that this would qualify me as an expert camper. But my experiences proved that I’m only comfortable in the wild if I have a healthy supply of tinned beans and toilet paper. I also learned that my over-fertile mind gets the better of me at night. I blamed my tent for this. It was too attractive to wildlife. What I needed was a bigger tent, a sturdier tent. One that didn’t look like a lettuce in suspenders.

I returned home and began looking for a new tent. One that could cater for all eventualities – from Arctic exploration to an African safari; something robust that could withstand the claws of a polar bear or the teeth of a bloodthirsty lion; that would remain erect in a hurricane and dry in a monsoon. And it needed to be traditional. That nylon and fibreglass rubbish reminded me too much of the famously ill-fitting bra that failed Helga Von Bustmeister during the 1932 Munich Games.

(If I remember correctly, Helga was three times World Belly Flopping Champion and part-time mascot of Save the Whale Foundation. She was reaching the finale of her ‘triple-spin free-fall blubber-whack’ when the bra gave way and took out three of the spectators. Helga was disqualified for entering the water a ‘full’ three seconds earlier than intended.)

I was compelled to purchase a better tent. A proper tent. Something built from canvas and metal. If Edmund Hillary could make it to the top of Mount Everest with a canvas tent, then I could endure the worst of the British weather in one. It was just a matter of finding the right model.

I find that doing my homework in these circumstances can prevent me from spending too much money on things I don’t need. Mrs H admires me for this and knows that I can always be relied upon to make informed purchases. I am never influenced by impulse or whim. I always buy within budget and insist that my lifestyle enables me to make full use of the new purchase. (I also have a pair of rocket-powered roller skates that run on aviation-quality bullshit.)

So I decided to do things by the book. I purchased the best guide to camping that I could find. It appeared to have been written by a retired Antarctic explorer who was now ‘doing the rounds’ at suburban campsites. The book contained advice ranging from ‘how to survive an avalanche’ to ‘how to cook your morning sausage’. It was my sort of read: serious to some and completely bonkers to others.

The book did, however, offer some valuable advice. It stated that the would-be camper can look forward to “spontaneous mini-breaks” where one can “roam, commune with nature and enjoy the free, wild and untameable outdoors”. How wonderful. “All that’s required,” said the author, “is a tent, a sleeping bag, a mattress, a hurricane lamp, and cooking equipment.” (Crikey. No mention of a toothbrush, deodorant, change of undies, midge repellent and bear trap. This author was hard core.) “And when it comes to tents,” said the author, “one should purchase the lightest possible model. A four-and-a-half pound tent is the upper weight limit; any more and it will limit the range you can walk in a day.” Four-and-a-half pounds? I’d be carrying more than that in tea leaves. Did this author have no style? I put the book aside and went back to my original brief, concluding that I needed a truly magnificent tent.

A magnificent tent is, in my book, made from canvas and has a centre pole that can double as a maypole. It has enough space inside for a ‘knees up’ with a troupe of Morris Dancers but packs away small enough to fit into the boot of a car. I thought that finding such a tent would be easy. But not so five years ago. There were plenty of canvas tents available in Army Surplus stores, but these seemed best suited to someone who wanted to park a minibus inside them. And there were plenty of second-hand tents for sale online. I actually bought one, travelling to North Wales to collect it, only to find it being used as a kennel for an incontinent Great Dane. (It smelled so bad that I had to stop the car on the way home and dump the tent in a dustbin.) Then I discovered a specialist tent manufacturer who still made canvas tents. They had everything from classic ‘A-Frame’ and bell tents to marquees large enough to house a wedding reception. But alas, all their tents were out of my price range. (I wanted something with presence, but which didn’t require too much explaining to ‘she who does the accounts’.)

I nearly gave up the hunt, and was on the verge of purchasing a backpacker’s nylon tent, when Mrs H told me to stick to my guns and be patient. Good thing, too, because the ‘Glamping’ (Glamorous Camping) bug soon hit the nation in response to those seeking a bit of Enid Blyton magic in the countryside. Soon there were canvas tents being made again, in proper traditional style, at a reasonable price. Hallelujah for the barminess of the English. But I was concerned. I liked them, but my ‘vanity of youth’ had an issue with the image factor: that Fennel (“he of wild camping fame, creator of the MacFennel Challenge and sufferer of the Squirrel Vindaloo”) would be accused of being softer than a Glamping duvet set. That I’d be labelled as someone who preferred to eat scones with jam under canvas on a summer’s day than spit roasting some roadkill over an open fire while sheltering under a tarpaulin. (Buy it now: the Fennel Grylls sterling silver camping set with tea light scone-warmer.)

And then I found something: the most amazing tent I’d ever seen. A cross between a tent and a tipi. Imported from Scandinavia by Nordic Outdoor (famed for their Gransforth Bruks axes and rather kinky-looking ‘Double-sided Hand Strops’), the ‘Tentipi’ range in khaki fabric had me drooling and murmuring: “I want, I want”. But again, the tents were too expensive. They were ten times more than my budget would allow. And yet I couldn’t stop thinking about them. They were definitely the best, but buying one would require me to sell the car and do the washing-up for a year.

I have a hypothesis (not concluded, but definitely under study) that people who love Fine Things have a small hamster in their head (mine’s called Gerald). This hamster has a habit of disconnecting the plug of all rational thought, then reaching for a set of bongos and banging out a jungle beat while singing “yeah, baby; let’s do it!” This is why I found myself having a conversation with Mrs H that went as follows:

“Sweetheart, I’ve been thinking. Money’s tight and we ought to cut back. As I can work from home and you’ve got a reliable car, it would make sense for me to sell mine and free up some cash.”

“Sounds logical,” she replied. “It would help us to clear the credit cards and maybe, if we’ve any money left over, we could replace the hoover that you killed by sucking up that tin of paint you spilled in the garage.”

“Good plan. It’s a good car, too. Should sell quickly. It’s only done 200,000 miles and so long as we sell it on a cold day, no one will notice that the passenger window doesn’t open and that the carpet still smells iffy from when we took Limping Pete to the chiropodist. We ought to get a few grand for it at least.”

“As usual, leave it with me to sort out; just don’t go spending money we haven’t got. I know what you’re like.”

The ‘Tentipi Safir 7 cp’ arrived via courier the next day. It was delivered to my next-door neighbour, who bought it round to my house while Mrs H was at work. Naturally, I’d also bought the essential accessories: comfort flooring, Eldfell Pro stainless steel stove and chimney, a spiral clothes dryer for the rare occasion when I might fall through ice and need to drip-dry my clothes in the tent, and a reindeer-hide rug for when I wanted to dress for a pagan ritual. Oh, and I treated myself to one of those axes and a hand-strop spanking board as well. (Hoping that, if Mrs H was going to punish me, she’d use the latter.)

I was ready to once again be a serious camper. All I needed was eight-foot of snow, a jar of pickled herring and a bottle of schnapps.

The tent came with a label. It read: “The world’s most versatile tent – for people who need maximum performance and flexibility. The Tentipi Safir is in the top 1% of the best tents worldwide”. The top one per cent! Worldwide.

“Oooooh. Oooh baby. Gerald, you beauty! This is why I’ve waited five years; it’s what I’ve dreamed about, and what I’ve needed. How could I have existed without it?”

The phone rang. It was Mrs H.

“I’ve contacted some car dealers,” she said. “Your car is worth about three hundred pounds. It seems the mileage is high.”

“Three hundred pounds?” I replied. “For a twelve-year-old classic motorcar? They must be joking?”

“Sorry babe, that’s all I could get.”

“Did you mention about the driver-side air conditioning and customised carpet?”

“No, but I don’t think it would have made any difference.”

“Sweetheart,” I said, tentatively, “I’d assumed the car would be worth ten times that. And, given the likelihood of a quick sale, I decided to spend the money now on an ultra romantic gesture. I know you urgently need a new hoover, so I’ve bought you a top-of-the-range rug to test it on when you do finally get one.”

“It’s a quality rug, natural hide and recently imported from Scandinavia. Obviously it came with some extras, but I’ll find a use for them. I just wanted to thank you for being so utterly amazing, and lovely, and considerate. You’re such an understanding wife. I love you.”

“Fennel. What have you done?”

“Er…remember that trip I had to North Wales? Well, when you get home, you’ll find me in the garden. Confined to the dog house.”

This is a sample chapter from Fine Things, Fennel's Journal No. 8